Too Long Are Our Memories + Borders by Michelle Eistrup and James Muriuki(Kenya).

Funded by the MY WORLD IMAGES 2010 and DCCD, INTERNATIONAL ARTS COUNCIL and NATIONAL ARTS COUNCIL towards the production and travel of Too Long Are Our Memories, Not About Karen Blixen, and Copenhagen’s Municipality of Art and Culture Fund.
STATENS VÆRKSTEDER FOR KUNST OG HÅNDVÆRK I GAMMEL DOK towards the production of Wild as the Wind, and Too Long are Our Memories.

In the video, Too Long Are Our Memories, an old black doll sits in a mantle, her eyes are nearly gone, a white and brown deer slope in between the fantasy and the imaginary, a girl picks coffee and a seer stands with a mirror reflecting the woody white wintery landscape around him. A voice of memories from another time slips in and out of the passages: ‘The Kenyans could not plant coffee, they could not plant sisal…’. Dudley Thompson, the lawyer who assembled the primary defence team of Kenyatta, recollects and describes the tension between the British colonizers and Kenyans. Old pictures on a wall refer to the past, the Kenyan Railway, royalty, Mombasa, versus the workers, the builders, who died to construct that lunatic line.
The piece is a meditation on the interaction and shifts that exist between these realities and questions our historical perspectives in connection to those times. There is redemption as well, we see three black workers reclaiming their train, dancing in and out of its remains to the symbolic music of freedom: jazz and ska. The souls of colonial maids and workers are suspended over the train and walk through different time dimensions arriving today as immigrants in the cold North, finding balance on the sharp cliff edges of this past. Too Long Are Our Memories speeds, splices and interweaves many visual layers and sounds, thereby creating imaginary spaces - or worlds - where the paths of dislocation and migration lead humans in search of a future.
Borders is a light-box installation that explores the reality and metaphor imagined in both time and space. “Through memories, connections, looped borders, hedges, pathways, habitats are intertwined. In these light boxes we show different notions of land, division and border, open or hidden. Borders reflect on the relation between spaces from the outer to the inner and the areas in between them. In general, borders indicate a division, a difference. Geographical borders exist in reality, while there are invisible borders between concepts such as multi-culture and monoculture, progress and tradition, present and past…“ – says Michelle Eistrup.

About James Muruiki
James Muriuki works as a photographer, graphic designer and was a curator at the Rahimtulla Museum of Modern Art (RaMoMA), Nairobi, where he worked since it’s opening in 2001. In 2010, he, together with Miriam Syowia Kyambi and Dr. Kivubiro Tabawebbula founded 3Collect, an artist’s collective engaging the curatorial practice, under which he works besides other individual curatorial engagements.
He says, “Over time, I have taken interest in exploration of gaps and spaces that are left by using photography and other art media. I endeavor to use photography as a medium of practicing art, either alone or collaboratively, rather than as a photographer. This has extended from photographic experiments to using photo-based medium and new digital media with a personal attitude and aesthetic. The art is a personal journey that has kept proving dynamic and yet static in many ways within my environment.”
Recently James Muriuki was awarded 2nd prize in 4th Photoafrica contest, which took place within 8th African Film Festival of Tarifa. He had a retrospective at Goethe Institute in Nairobi, is part of the Walther Collection in Ulm, Germany and he has exhibited in Snap Judgments: New Positions in Contemporary African Photography, curated by Okwui Enwezor. James lives and works in Nairobi and his work has been exhibited and collected in Kenya, South Africa, USA, Denmark, Spain, and Germany among other countries.

NotAboutKarenBlixen evolved as a long-term collaborative project between three Kenyan artists, three Danish artists, and a German artist, working in various media. For the participating artists, the NotAboutKarenBlixen project offered a unique opportunity to create works of art, which incorporate impulses from Denmark and Kenya.The artists started their projects in Denmark at the Danish Art Workshops in snow-covered Denmark in February, working in cross-national pairs. Their collaboration was continued in Nairobi in June in what was, for the Danish participants, an unexpectedly cold Kenyan winter. Works created by these ‘art-duos’ have been exhibited at the RaMoMA Museum of Modern Art in Nairobi in July 2010 and at the Karen Blixen Museum Sept – Nov. 2010. The entire project was curated by curator and artist Michelle Eistrup(Dk/Jamaica) and Brooke Minto(USA)

“We hope through collaboration to extend ourselves and to relearn, re-evaluate the past in a present context. The collaboration is also based on medium and experimentation. The artists had to learn the other’s artistic language, an essential tool for gaining knowledge and understanding of the other”– explains Michelle Eistrup. The title, NotAboutKarenBlixen, signals that this exhibition is not directly about Karen Blixen. The exhibition uses the name of Karen Blixen to inspire both artists and audience to reflect on present and future relations between Europe and Africa. It illuminates current and historic issues through contemporary art media and performance. Thus the work and legacy of Karen Blixen becomes a catalyst for a bridging Danish and Kenyan culture, or, as Michelle Eistrup puts it: “We wish to contribute to a wider understanding of Kenya’s and Denmark´s postcolonial heritage through the artistic process and modern media in art, such as photography, video, sound installation and performance”. 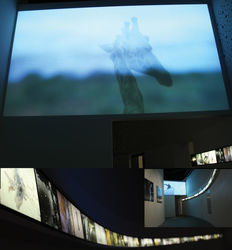 Too Long Are Our Memories + Borders, Installation, Naturama 2012 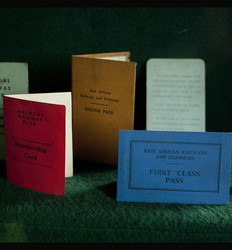 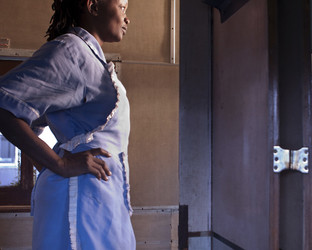 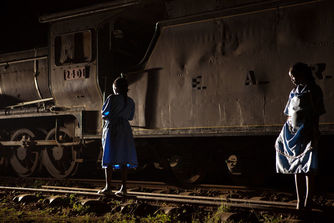 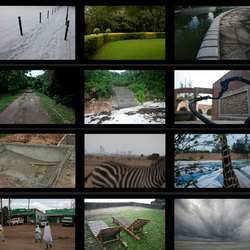 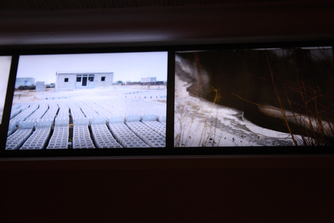 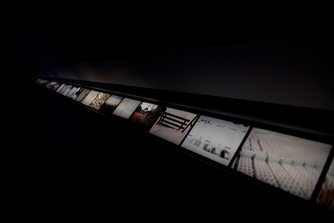 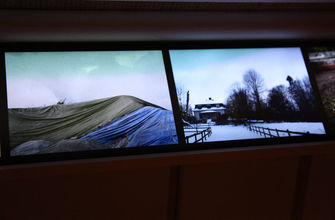 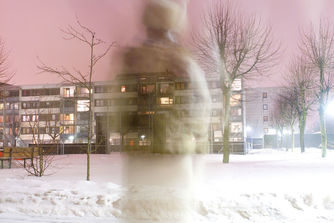 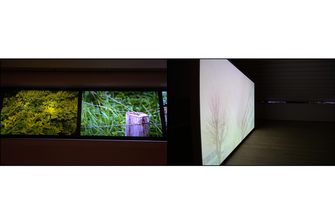 Too Long are our Memories and Borders Installation 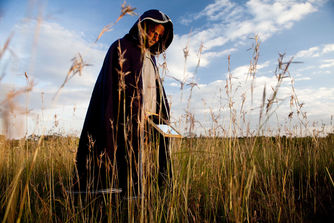 Too Long are our Memories